I went to see Into the storm the other day. People compare that with the Twister movie but I’ve never seen it so I can’t compare. I liked this one. Especially when Richard Armitage is in it. I could listen to him talk for hours. That’s eargasm all over.
Some scenes were a bit silly. Looked like human flags holding on to something. In real life they probably would blow away. The movie was exciting enough for my taste. It got me thinking, what if real tornado’s would be like that. I doubt they would appear that many times in a row. It seemed in the movie that when one is over, another one is coming right behind. But how would I know since I’ve never experienced one.
Walking out of the theater when the movie was over and back to the real world, I felt relief. I’m glad I live in a country where there’s no earthquakes or tornado’s. There’s been small one’s here but that’s nothing compared to another countries.

There’s actually people who chase tornado’s and storms. They must be really brave or they have a death wish. Some have too. Which makes you wonder, is it really worth it? Even by just looking is scary enough.
A tornando could wipe all man kind of this earth. That’s more likely than robots taking over the world. If people keep distroying the planet, it might happened one day.

So I went today to see Guardians of the Galaxy. I actually loved it. I don’t understand why some people don’t. But each to their own. Here’s my “review”

Positive things:
The excitement and the humour. I knew there would be a lot of action and intense moments. That’s what I like. It didn’t disappoint. It was also very funny. Especially when Peter Quill was dancing to the music. Also the Kevin Bacon mentions. The humor between the characters was funny as well. Rocket Raccoon rocket. Bradley Cooper did a great job there with the voice. Vin Diesel as Groot must have had the easiest line in his whole acting career to remember. “I am Groot” Over and over again.
The music was good too as I love 80’s music.

Negative things:
The scene where they were planning in Quills ship how they would attack Ronan. There was just too much talk. I actually thought, is this the end? That scene could have been shorter.
The other thing was Ronan. I thought he was a bit too “robotic” (and I don’t mean Lee Pace acting which was great as usual) I expected him to look more “human” so to speak. But maybe I just expect something different.

Special mention:
Now I know what they meant with Howard the Duck 😀 Hint, it’s the end of the movie when the credit ends. So do stay until the end.

If I would rate this movie I would give it, 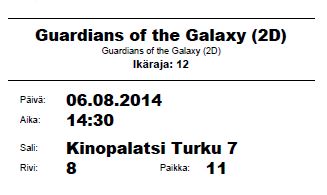 So I’ve decided to go and see Guardians of the Galaxy after all. I’m not into mutant stuff but if I could watch Lord of the rings, I can watch this. The real reason is Lee Pace. I usually don’t go and see a movie only because of an actor I like is in it. But there’s just something about him I just can’t resist. Yes, he’s that good.

Another reason is the trailer I saw. I used to refuse to watch it. But I changed my mind. The trailer was kind of funny. I’ve never watched Marvel movies before but this movie looks interesting. I might be disappointed after I’ve seen it. But better be save than sorry.

If any of you have seen the movie, please keep the spoilers to yourself. Thank you.