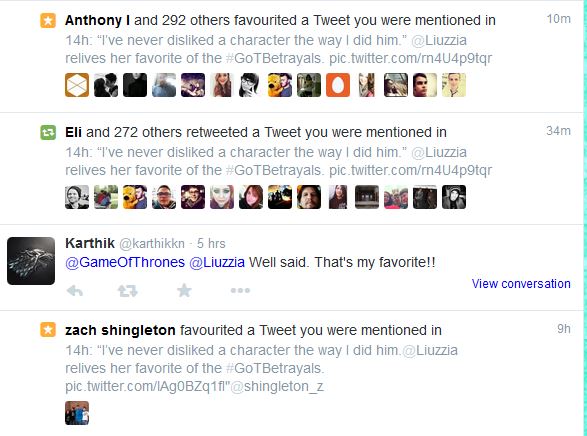 Fame at last! 😀 I knew my tweet about Game of Thrones would end up on air but I didn’t know when. What a surprise to see 40 notifications. I forgot all about this tweet so I didn’t really know why I had that many. I never get that much. Most of the time my tweets don’t get that much attention. Twitter can be a great place with so many great people in it. I’ve never had this many retweets and likes before. What a great way to come on Twitter and see that. That’s the best news in a while.

I can’t believe season 5 is on in a few days. I have to wait until Monday to see it though since it’s not on TV over here yet. But it’s all worth it.

Am I really watching The Blacklist or is it a dream?! No it is true. Otherwise I wouldn’t be remembering all this. I thought this was a crime show but now it is turning into a soap opera. Last nights ( watched it today) episode was good. I was very pleased afterwards. Except when Tom called Liz (again) asking for her help. No way should she help you, you pathetic jackass 😛 Then I saw the promo to the next episode. That was utterly disappointing. This is where the soap opera begins. OK, it’s just a promo. It doesn’t tell what is actually gonna be about.

The writers are trying to make this affair with Liz and Tom some kind of “please take me back” crap. No, no, NO. Not this. It’s sickening. She should not give him another chance.

“You (Tom) killed lot of people but that’s OK. I don’t mind. You’re childhood wasn’t good but you didn’t know better when you joined that criminal group (or whatever it is) Oh poor you. I’ll make it better. I forgive you, kiss kiss”

It’s obvious the writer’s are men. If it was written by a woman, it would look different. Liz should be angry at Tom but it’s seems she doesn’t stay angry for long. Those phone calls with him proved it. Why are they making her this weak woman who can’t make up her mind? If she’s gonna forgive him, then she really is stupid. The same with Tom. He should remain bad and not become the wuss he was before. But it seems the writer’s are desperate to keep the Tom story alive. Do they think they will gain more female viewers by making him lovable? As much I like Ryan Eggold (and his hotness 😉 ) his character is getting annoying.  If he stays, he could at least keep up with his manipulating persona and hurt Liz feelings even more. Or they should just kill him off. But that wuss, I do not want to see ever again. That annoyed me in the first place. I don’t know if I really look forward to the next episode. Especially seeing the promo where (yuck) Tom and Liz kiss. That’s so wrong is so many ways. “Let’s start over” Yeah, let’s forget all the lies and people you killed. Let’s just forget everything that had happened and start over. Meh, I really hope it’s just a plot. Or he’s just in denial.

I don’t understand why there are people who want those 2 together. They must be mental. Or they don’t see the difference between the actor or the character. So the Tom had a picture of the baby they were gonna adopt. That’s not sweet, it’s pathetic. Then this “he still loves her” crap. Someone that has never experienced love, can’t know what it really is. Maybe care but not love. I can see right through you. There’s only one thing he loves and that’s himself. As long he’s safe, nothing else matters to him. I don’t know why some viewers doesn’t see that. Maybe they got distracted by that shirtless scene a few episodes ago. But that doesn’t fool me.

This show has never been realistic but for once I really hope they won’t make it a soap opera. If they are, I’m done with this show. I want that mystery back. The way it used to be. If I wanted to watch crap, I would watch some reality show instead. No offence.

(sorry if you have no idea what I’m writing about)

Damn I have to wait until Friday evening before I can watch #TheBlacklist and #TomKeen The latter,I mean really watch 😉 @Ryan_Eggold

This is all you get from me at the moment. Busy, busy.