People always judge you when they meet a person they see for the first time. But looks can deceive you. If someone wears piercing in their face and black clothes, it doesn’t mean they are evil people. In job interviews, the employer judges you. Your resume can look perfect but if it lacks something they’ve looked for, then they underestimate you and think you can’t do the job. No one is perfect and you can learn new things no matter what age you are. You should never underestimate people you don’t know. Even if you do know them, there’s more than meets the eye.

Ageism is a problem in the job search. If you’re in a certain age, the employer thinks you can’t do a job because your knowledge might be out of date. You would think employers don’t know that older people also keep up with the times. It seems that people in already in their 40’s are too old for employers. You should be 20 and have job experience of 30 years. You read stories from people who’s 50 and over about how they’ve got an interview but haven’t got the job because of their age. Employers want younger people who they can fool. Experience has nothing to do with getting a job. They want to hire people they don’t have to pay too much for. Unfortunately, it’s the older employees who have to suffer from their greed.

One of my fears is getting stuck in the same routines and now it seems it’s happening. If my mother was still alive, she would try to push me on trying to find some kind of job. Now I don’t have anyone who could give me encouragement. My father has worries of his own. My mother was the one who was most worried about me. She understood about job search since she was also between jobs from time to time. She also wondered why I never found jobs. The job centre has never helped me get one. They’ve only offered me internships or courses to take. Looking through the job ads and such, I’m almost giving up hope. There’s nothing for me there that I’m qualified for. It takes all the excitement of job search when you can’t find anything you could apply for. All these LinkedIn and other social media are useless. The same with these pieces of advice how to get a job that you can find online. It doesn’t help me at all. They say job search is like dating but I’m unlucky in that too so that rules that out.

I hate to say this but the reason no one wants to hire me is because I’m an introvert. I give bad first impressions and therefore people think I’m anti-social. I try to be more open but it seems it’s not good enough. Other people have no patience to get to know me. I’m more than meets the eye. If others would bother to get to know me and not just give up before I show them the real me. I can be social and a lot of fun. It just takes a time to know me. You would think a trustworthy person would be likeable but you need to be a blabbermouth to get somewhere in life it seems. I’m tired of people noticing I’m quiet. Does it say it on my forehead? They should really think before speaking because when I start talking about a subject I know something about, they wish I could be silent. I’m actually really considering to become self-employed. I’m bored with people judging me by the way I act the first time I meet a new person. If I really got a job interview, I wouldn’t get the job since my replies would be really short. I want a job where my skills are the main thing and not how social I should me. I wish I could work for someone else to gain more experience but if that isn’t meant to be, I need to learn to become better by myself.

I’ve never been in love but in lust, a lot of times and I am at the moment but unfortunately, it’s with two men I can’t have. 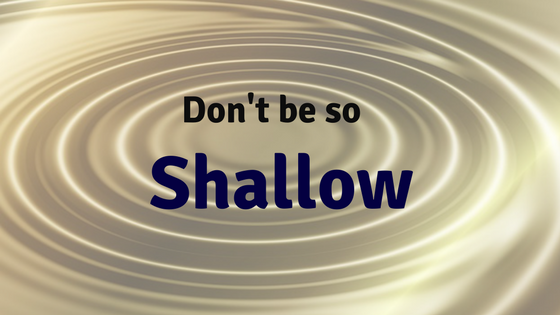 Media tells us how to dress, how to look and so on. This world is shallow. From my experience, people also choose their friends by the way they look. No one respects a personality. If you’re a woman, you should look like a model. You should follow fashion and wear makeup. Even men have to look a certain way to be accepted. That’s so wrong. Everyone should look the way they want without having to get ridiculed. We all can’t look the same. If you want to look natural, you can’t change the way you look. Some people are so shallow, they use plastic surgery to look like someone else. Especially celebrities. Hollywood is shamelessly shallow and ageing is a taboo. Now ordinary people suffer from the same “illness” It seems you need to look beautiful or gorgeous to be accepted.

Not just being beautiful, you need to be thin as well. Every year there are tips how to get in shape for the summer. You almost have to starve yourself to look good in a bikini. So sorry but everyone doesn’t want to look like a stick with no meat on it. Life is too short to count calories and exercising your pants off. Of course, you should eat healthily and move away from your couch from time to time. But you have to eat sweets and fast food from time to time. As long as it’s not all you do. You don’t need to have a flat stomach to feel good about yourself. If a person is overweight and they post photos of themselves online, there are people who criticise them. Like social media is only for the thin people. Everyone has the right to post anything they want without having to get negative comments from strangers. A strong person doesn’t care what others think of them. You don’t have to please other people. If you’re happy with what you are, that’s all that matters. There’s always gonna be negative people around and they shouldn’t get the satisfaction to put down other people.

I rebel against all standards of beauty. If people don’t like the way I look, then too bad. I’m never claimed to look anything special. No one has never said I was ugly but suggested so. One guy asked once in school if I ever been in a horror movie. I didn’t understand what he meant at the time but now I’m sure he meant I was ugly. He must have looked like an oil painting himself. I tell you, he wasn’t. He was nothing special. It’s so easy to criticise others when themselves don’t look like models either. Maybe he thought he was god’s gift to women in his opinion. It’s strange that men can look as ugly as they can but women need to paint themselves to be desirable. I do admit that sometimes I can be shallow myself. But I accept the way people look. I’m not gonna put them down by saying to their face or suggest they’re ugly. I don’t choose friends by the way they look either. I can accept differences. It’s really people’s loss if they don’t want to get to know me because of my appearance. I’m more than meets the eye and I’m not trying to be cocky about it.

If people could look past someone’s appearance, there would be less shallowness in the world. Now people judge you as soon as they see you. First impressions can fail and you shouldn’t give up so easily. No one is perfect and that goes for beautiful and gorgeous people as well. If someone looks perfect, it doesn’t mean they’re inside the same. Every human on this earth has their faults. Some have good taste in clothes and some have not. Appearance is the eye of the beholder. You don’t have to dress like you’re going to an award show but at least wear something decent. No matter what sex you are, wear what you feel confident in. Don’t be the shallow one. There’s too much of that in the world already.