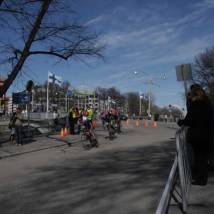 Let me tell you story. Picture it. It’s summer in 2010. The sun is shining. It’s time for the yearly cycling competition. It’s held in a city somewhere in Finland. The race takes place around a river. Over a bridge to the other side of the river and back over another bridge. The race has 50 laps. Viewers better not get in the way because they are going very fast and the competition is tough. Even though it’s summer, it’s not that warm. As a matter a fact, it’s kind of chilly.

Here I am standing with my camera in my hand. I’ve watched this competition before but without a camera. I have tried many times to take pictures of fast-moving things but they haven’t turned that good. I’ve tried different set ups but I’ve never found the right one. Maybe I have the wrong lens. I’m using a EF-s 17-55 mm but that’s all I own but I’m trying the best I can. I usually keep the Mode Dial at P because it’s faster and I don’t have to think what set ups I should use. Now I try the Tv and M but the cyclists are going so fast so I don’t have time to think about set ups. It’s now or never. Click, click I go. I move to another place and do the same. I don’t care about the set ups now. Who has the time? I’m here to take pictures and not practising photography. I take pictures and hope for the best. I’m not one of those people who take hundreds of photos of one thing. It’s not like I’m a pro photographer. Even though that was my dream at the time. Not so sure anymore. Who wants to hire me anyway? I don’t even have a driver’s license. Like that’s important.

When I get home and look at the pictures on the computer. I must say, not bad after all.