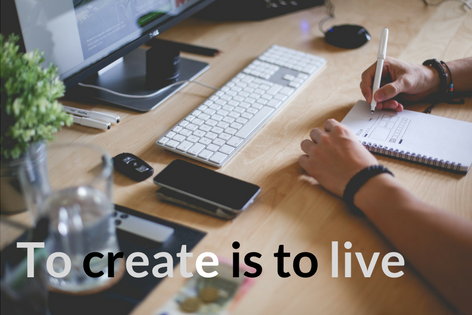 I’ve always been a creative person and to create is to live. There are different ways to be creative and it doesn’t have to be drawing. That has never been my favourite thing and I guess no one has really known me as someone who can draw very well. It’s kind of funny because both my parents could do it much better than I have. My creative talent is somewhere else.

Sometimes I doubt my abilities. I think maybe it’s only me who think I’m good at creating things. It doesn’t really matter what others think though. I’m still going to create because that keeps me focused and it helps me get through life. Creativity is like breathing and you can’t stop doing that. It’s also a good exercise for the brain.

Being creative can also be annoying. Especially when you post things online. You do a lot of work and still, no one appreciates your efforts. This happens a lot when I post my fan fictions online. I don’t do that for my own amusement. If I did, I would keep them to myself. I can understand if people don’t want to read them because it’s not about their favourite subjects. But those who does read fan fiction in general, you would think they at least would leave a comment or at least a like. I wish people would see my stories the way I do. I’m really proud of my work and it’s a shame I don’t get the same reaction some writers do. You never really know what people read online so those statistics doesn’t prove anything. Every story can’t be as popular as the others and I can live with that. The lack of reactions just irritates me sometimes and it takes out all the creativity in me.

Everyone should be allowed to do things they find most comfortable with. Those who criticise creative people are probably only jealous because they’re not. You can still create even if it’s just a hobby. Creations don’t have to be artistic. Creating can be cooking, baking or just something to do. If people knew how to use their creativity better, they wouldn’t need a smartphone to keep them entertained. There’s no such thing as bored. If you know how to create then you should have no problem to make up something to do. Technology has made people lazy and there’s no creativity in that. To create is to live and you don’t need gadgets for that. Unless you’re the one making creative apps and such. That’s another story altogether.

One thought on “Creative life”