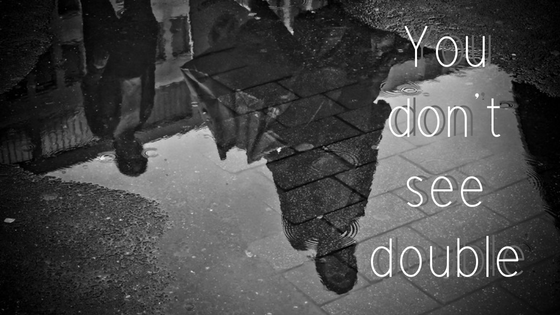 I’m so glad I don’t have a dopplegänger, a lookalike. I just couldn’t handle another me. If there was someone who looked like me, they wouldn’t be like me. They would probably be totally the opposite. If I saw someone who looked like me, it would feel creepy. Maybe if it was my twin, it would feel different because then I’ve seen myself from birth. If it’s a stranger it would be really awkward. I’m not really confident when it comes to my looks. I don’t even like looking myself in the mirror. I hope there wouldn’t be someone like me because then I wouldn’t be one of a kind. Everyone is unique in some way and not just me.

For example, no one will ever replace my mother because no one is like her. Someone can be a bit like her but they will never be her. The same with anyone. You can never fill the void with another person because they’re not like that person. Confusing? Let me give another example.
If someone said to me to get over a guy I like because I won’t have a chance. I will find someone closer. But there isn’t anyone like him. Maybe someone can be a bit like him but they never be him. Besides if they were like him, it would feel weird. It’s the personality of a person that can’t be replaced. I don’t know if that cleared it but anyway.

I am what I am and no one can be me. No one can imagine how it is to be me because well, they’re not me. The same goes with other people. I can imagine what someone is like but I never really know how it is to walk in their shoes. I wish someone could one day think of me, I was one of a kind and I could never be replaced. They would miss me terribly when I no longer exist. They can find someone else but they would feel I could never be replaced. That’s an impression I want to leave this world. A doppelgänger of me won’t walk on this earth because, well I’m one of a kind. And so are you.