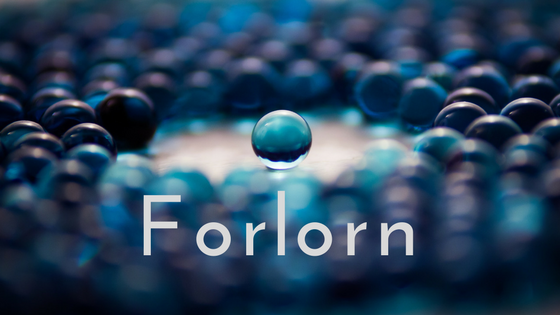 It seems that everything I do or do in this life so far hasn’t given me any success. I feel forlorn and cursed. Maybe people find me uninteresting. Especially when it comes to job search. Studying doesn’t seem to help to get a job. I don’t know what I should do so someone could find the connection with me. Nothing has come easy for me. In social media, Tumblr blog, personal life etc. For example, I had to start my Tumblr blog all over again because I wanted to delete my previous one. To make a long story short. It took me at least 5 years before I even got followers there and I need a way to get them back. Should I wait another 5 years? OK, it’s not the end of the world if people don’t follow me. It didn’t take overnight to get followers on this blog either. My point is, it can feel frustrating to work so hard and yet you don’t get much back no matter what it is.

It’s mentally exhausting to have a thought you’re not qualified for anything. I might say I don’t mind if things won’t happen the way I wish. But that’s just a defence mechanism. I don’t want to be famous or anything but I don’t want to be ignored either. Maybe it’s an introvert thing or a Gemini thing but I want things but I’m not confident enough to do anything about it. Sometimes I dislike myself. I’m probably the most indecisive person I know. I really don’t practice what I preach. It’s so easy saying to other people what to do but doing them yourself is difficult. I really hope there is no one like me out there. I could not handle a person like me. I guess my weakness is putting myself down. I know I can do anything but I’m too much of a coward to do anything. When things go wrong, I usually blame myself. But like everyone else, I have a dark side.

I really had some anger issues when I was younger. I had moments when I totally lost it. I could throw things and stomp as loud as I could. All of this happened at home. I never showed that side of me in public. I didn’t hurt other people, just myself. Sometimes I could be so frustrated, I hit myself. I didn’t know why I was so angry. To this day, you don’t want to see me angry. I still got easily irritated but it’s only because the way people behave. I have my pet peeves like anyone. I get over my anger easily though. I learned there are things you can’t do anything about. If I don’t get what I want, I don’t get upset. How other people behave, it’s not my fault. I can’t make people become friends or employers to hire me. As an adult, you can’t have tantrums like some kids have in public. I really hate being angry. I become a really unpleasant person. I swear like a sailor and I might say hurtful things. That’s a side I don’t want other people to see. But people shouldn’t act like idiots either. What goes around, comes around.

Most time I’m a calm person. I have manners and take other into account. When you get to know me, you can see I can be silly too. I just hate being the one who has to take the initiative. In school, I had to start a conversation to get to know people. Never the other way around. I got the idea they didn’t want to be my friend. Even now in adult education. They say you should network with your classmates but they didn’t even ask if they could keep in touch. I guess I wasn’t that interesting to them. Oh well, people come and go. I rather am forlorn than be with the wrong people. The same with relationships. I might be picky but at least I have standards. I always want someone I can’t have anyway. For some having someone in their life is really important but for me, it’s not the end of the world. Besides, there are so many other interesting things to think about then relationships. Freedom is so much more appealing so I stick with that for the time being.