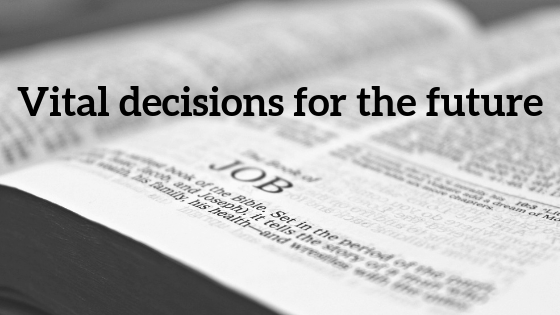 Being unemployed sucks even if you get benefits and you get by somehow. But not having a job is no fun. Some people do everything right but yet they won’t get hired. Then for those who have succeeded to get a job, they think if they have then anyone can. Sorry to burst their bubble but everyone isn’t as lucky. It’s easy to tell others how to do things but finding a job is not like snapping your fingers. It’s great that people find jobs but that won’t help those who don’t.

I have to make vital decisions for the future. It’s not like my life depend on it though. It’s not that desperate. But it can’t go on like this forever. It’s already 3rd week of this year and I haven’t done anything. I have that studying thing which is next week again but that’s it. I should have something else too. I had a job suggestion in my email but I had no idea what the job was. I read it a few times and I still didn’t get it. It wasn’t the job I was looking for either. At least I’m not totally visible. Moving on. I found an internship place but it’s without pay. At least it’s closer to the subject I study now. In the application (which is online and in English) there’s this question I don’t know what to answer to.

Why would you be the best choice for the position(s)?

I tried to find answers to what you could answer to that question online but I didn’t find what I was looking for. I even asked on Twitter but as usual social media failed me again. I guess I’m left to my own advice again. Unless anyone who reads this has any suggestions? Something that could work. Just in general and not necessary to this application. Please, do comment if you want. I’m probably gonna find a solution to this problem before that. But still, I’m only asking.

The reason why I hate job search is questions like these. I never know what to reply so I don’t even bother applying. It’s so stressful. I’ve seen some funny memes on Pinterest about what to say in a job interview. But you can’t say those things in real life. One was, “Why should we hire you?” Answer, “Because you’re hiring?!” You really need to put yourself in the employer’s shoes. It can’t be easy for them either. They get a lot of applications and they have to choose who to ask for an interview. They must be really lucky if they find the right person for the job at first try. That’s why it’s so difficult for the job seeker to answer questions. You have to stand out but how do you know if you did stand out? Maybe someone gives the same kind of answer you do. There are so many tips online what to write in a job application. But then there are others who might have seen the same ones and uses that. Using tips you find online still doesn’t get you a job. It’s a jungle out there in the job search world.

Introverts nightmare, How to sell yourself? That sounds like prostitution. But that’s an “It” thing these days. “Elevator pitch” is a better word for it. But us Finns don’t talk in elevators. We stay quiet until we get out of it. Joke aside. No one ever stays long enough to hear me. As soon as they see me, they’re already judging me. Maybe not that easy though. I’m exaggerating a bit there. I can’t describe myself in 30 seconds. It takes less than that since I don’t know what to say. If I do it’s usually negative things but you can’t say that out loud. I’m not very good with words in general. It’s different when it comes to writing fiction. I wish I could use that in my daily life. It would be much easier if I could describe myself like Loki does in Avengers- Infinity war.

I, Loki, prince of Asgard… Odinson… the rightful king of the Jotunheim… god of mischief… do hereby pledge to you… my undying fidelity.

See, much easier. Mine would stop at my name and then a long pause. If it was being said out loud that it. If I had to reply by writing then I would have time to think.

I think I found out what to write to that internship application while writing this post. I write what when I have. But still, I would like to know what you would answer to this question. For any occupation. “Why would you be the best choice for the position(s)?”

6 thoughts on “Vital decisions for the future”